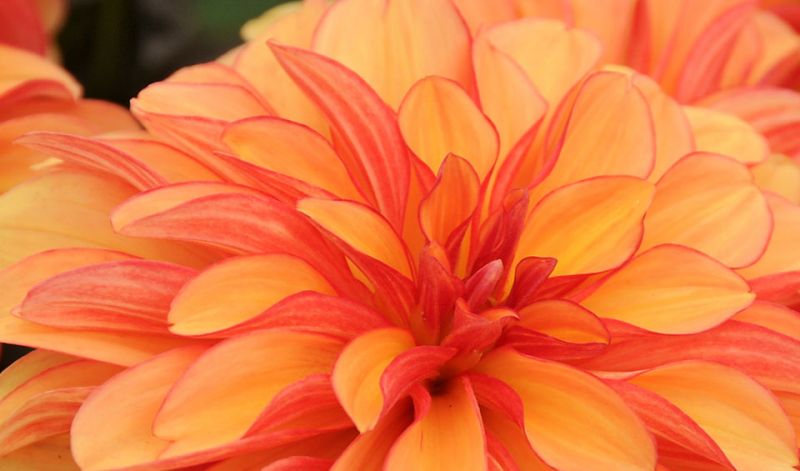 Central America, Mexico and Columbia. The Aztecs gathered and cultivated dahlias for food, ceremonial and decorative purposes and the long woody stems of one variety was used for small pipes. The dahlia is named after 18th century Swedish botanist Anders Dahl. It was named the national flower of Mexico in 1963.

Dahlias bloom for a very long time and are available in many shapes, sizes, heights and colours. Blooms sizes vary between 1" / 2.5 cm and 1 foot / 30 cm ("Dinnerplate Dahlias"). Heights vary between 12" / 30 cm and 6-8 ft / 180-240 cm. Plant after all danger of frost has passed. Dahlias prefer a light, sandy soil with good drainage. Choose a sunny location in cooler Northern areas, a spot with partial (afternoon) sun is better in warmer Southern areas. Do not plant too deep: the crown should be at soil level or just below (with part of the old stem still showing right above the soil line). Water well initially then wait until the first sprouts start to show and inrease watering as plants start to grow. To encourage growth of a sturdier and more bushier plant, as well as more flowers, do not hesitate to break off (pinch) the center of the sprouts (shoots) once or twice. First after two or three sets of leaves have developed and again after a few weeks. This will force the plant to form more side shoots. Cut flowers regularly (only after they are almost fully open and enjoy them in a vase inside) or deadhead to boost further flower production: the more you cut, the more they will bloom. The taller growing varieties should have a sheltered location to protect them from the wind and staking them is definitely advised.

Flowers in the Dahlia Family